The mouse turns 40: An interview with Paul Saffo on technology’s past and future

About 40 years ago, in 1968, Doug Engelbart gave the first public demo of the computer mouse as part of an exhibition of his system for augmenting human intelligence. Paul Saffo, a futurist and visiting scholar at Stanford University, will lead a discussion recalling that seminal event. On Dec. 9, a number of luminaries will gather at Stanford to celebrate the anniversary of the demo, which is now available as a video for everyone to see. The event is titled “Engelbart and the Dawn of Interactive Computing: SRI’s Revolutionary 1968 Demo — A 40th Anniversary Celebration.” (A similar event was held 10 years ago). Below, we’ve interviewed Saffo about the significance of the mouse’s introduction, its relevance to today, and his own thoughts on the state of Silicon Valley.

VB: Can you tell us about that demo that Doug Engelbart did to demonstrate the first mouse 40 years ago?

PS: It was an amazing demo. I’m thrilled that SRI is doing this. People should know about Doug Engelbart’s specific ideas, but also just what an outlandish vision it was. The whole point of this is to inspire future generations. I wasn’t at the demo. I’ve seen the video. But it was the first public demo of the Augment system. Doug was on a computer on stage in Brooks Hall communicating via a microwave link to a colleague at SRI. It was the first big public demo of the mouse, of shared editing, collaborative writing and editing on screen. For most people, it was the first time they saw display editing, multiple windows open at once and a dramatic leap in interactivity. These were the days when you fed punch cards into a computer. The audience –- all computer professionals –- was electrified. Alan Kay, one of the fathers of personal computing, said it changed his life. He famously said that he didn’t know what Silicon Valley will do when it runs out of Doug’s ideas. Bob Taylor, one of the fathers of the internet, was in that audience.

VB: How do you fast forward to today and tell people about the significance of this history?

PS: A lot of things that everybody takes for granted, like the mouse, was shown there. He posed the notion you could have an online repository of ideas. We owe this man a debt of gratitude. It demonstrated, in this distracted time when everyone is thinking more short term than ever, it showed the power of long term thinking. Doug set himself a goal. He stayed on that path from 1945 through 1968 and beyond and created the artifacts that we all use today. There are still lots of ideas buried in Doug’s work and waiting to be turned into reality. It’s not just an exercise for historians. 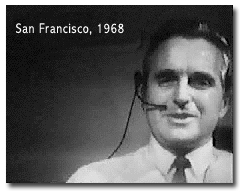 VB: Why has the mouse lasted so long?

PS: I hadn’t thought about it. There is an intrinsic conservatism behind our media devices. They last a lot longer than we think they ever will once they are accepted. The mouse has had a long life. It makes sense on the desk, but you need alternatives on laptops and portable devices. Doug had a mouse with one button, and then quickly came to a mouse with three buttons. That’s still standard today. It’s like the QWERTY keyboard. Look how long that has lasted.

VB: Would we have been better off if he invented a multi-touch display, like the iPhone has?

PS: (Laughs). His researchers invented a whole bunch of interaction devices. They had one that looked like an arm on a pivot, with a vertical access and the arm slides through it, so that it slides and swings in and out. It pivots. Like a pantograph arm. They played with track balls. They had mice with different kinds of buttons. They found that the mouse stuck. My recollection is the first commercial touch screen was created by Hewlett-Packard in the 1980s. We had the equivalent of touch with light pens, like with the original Sage Terminals. That had a built-in ash tray. And the light pen looked like a Buck Rogers ray gun. The mouse and the touch screen do very different functions. The disadvantage of a touch screen is it is not good for long amounts of interaction. Hold your arm out straight and see how long it takes before you get tired. The mouse uses only the muscles above the wrist. You don’t carry as much weight on your arm.

VB: What should visionaries be working on today?

PS: Someone like Doug would be working on exactly what he was working on in the 1960s. He didn’t set out to invent a mouse or a display for editing. His goal was to augment human intellect in the service of giving human beings tools that were the equal of the growing challenges humans were facing. We have had that conversation. Finally there are computers powerful enough to do what he wanted to do. Consider how little he had in computing resources to pull it off in 1968. It’s astounding. Doug leads the Bootstrap Institute [now the Doug Engelbart Institute] and is still leading the vision. Our inventions tend to follow the curve of Moore’s Law. His mission is to create exponential responses to the exponential challenges we face.

VB: How many cycles of Moore’s Law have we had in 40 years?

PS: It has advanced at different rates from time to time, with the doubling of chip capacity every 18 months or so. That’s 26 doublings. Holy shit. That’s dramatic change.

VB: Is technology where you would expect it to be, based on Moore’s Law?

PS: We are making advances at the rate that one would expect. We are not making advances at the rate one would hope. This is why Doug’s ideas are still relevant. We tend to use a new technology to do an old task more efficiently. We pave the cow paths. Using computers to send email is doing the same thing that the Postal Service used to do. It’s paving the cow path. That’s human nature to solve problems that way. In 1907, Leo Baekeland invented plastic, which he called Bakelite. He tried to make plastic look like something familiar, like tortoise shells. Soon enough, they figured out other things to do. Computers are still in this Bakelite stage. Laptops look like typewriters with screens. This is a revolution that is 40 years old and is still getting under way. Next time at the airport, look around. Most people are looking for a chair to type on their laptops. Keyboards shouldn’t be in your lap. You should have other ways to interact, more like the iPhone.

VB: Is there something today that gives you hope about progress for innovation?

PS: One innovation is waiting in the wings. People should look back at Doug’s software. There is a device gap in our lives. We have the big computer on the desk. We have the thing in our briefcases. Then there is a gap. Next thing we have is the handheld iPhone or iPod Touch or the BlackBerry. The gap is a tablet device that is not like the Tablet PC. We need a device that is an access window, connected to the Internet, with a high resolution screen for reading, like the Amazon Kindle. That’s the gap that every consumer electronics company on the planet is working on. It is not just a device for scribbling on with a stylus. It’s designed to be in touch with the web.

VB: Doug had an idea for something like this?

PS: His was augmenting the human intellect. He is known for the mouse. But he thinks that’s the least important of his inventions. It was just an artifact in the Augment software. The idea of a tablet device totally excites him.

VB: Was it the right thing to do to show off his ideas so publicly?

VB: We have another downturn now. What do you think of Silicon Valley’s future?

PS: The Valley’s future is bright. We have a huge advantage over the rest of the country. We just went through this eight years ago. It’s fresh in our memory. We know what bubbles are like. We know you don’t turn off the lights and go home. The rest of the country is walking around like stunned raccoons. Silicon Valley understands failure. That’s why we succeed. Silicon Valley has always been in danger of drowning in the waste products of its own success. This gives us breathing room. We live and die by change in this valley. The absence of change is death. I’m not trying to minimize the pain. It is precisely in times like this when you think long term. Focusing on the short term will turn out badly. Panic is not a financial strategy. The market is an efficient mechanism of wealth transfer from the impatient to the patient.

VB: I guess Doug didn’t cash in on his inventions?

PS: His demo was a tectonic shift in the computing industry. Doug ended up being very obscure. Apple made a fortune off his inventions. Doug had plenty of opportunities to cash in and decided not to because he was focused on his longer-term vision of augmenting human intellect. Doug is a long-distance thinker.

VB: What kind of technology are you excited about?

PS: I’m very interested in sensors. I see a decade-scale progression, from PCs to the internet to phones to today. Now the key technology for this decade is sensors. Accelerometers. MEMS devices. Cheap video cameras. RFID tags. It’s an interaction revolution. We don’t yet have the poster child for the sensor revolution. Where is the next big fortunate to be made? The next big thing is robots. Computers from the 80s, the connectivity from the 90s, the sensors now. You put wheels on it and you’ve got a robot. That’s the next thing that will blow everyone’s mind: a vast robotic revolution.