Entering a local San Mateo supermarket this morning, I was greeted by a signboard in front that read, “To Our Patrons: Please, Discourage Pan Handling by donating to Organizations that provide assistance to those in need. For information see Store Manager.”

The intent is obvious: help us shoo-off the unworthy hoping for a handout. The invitation to donate is an insincerity calculated to dissuade small acts of generosity. It is false compassion, wrapped in a phony request.

The sign caught my eye because it so perfectly captures the climate of phony compassion that has become the genteel norm in the last eight years. And today is Martin Luther King Day, a day many celebrate with acts of community service. Against this backdrop, the market’s sign hits at best a sour note.

The sign’s glaring phoneyness is also an indicator that a vast shift is underway. Our incoming President has placed considerable emphasis on service, and I bet it will yield results as dramatic as Kennedy’s creation of the Peace Corps four decades ago. Even as my local market shoos-off the “panhandlers”, an Obama supporter is organizing a Peoples Inaugural Project that will give hundreds of poverty-stricken and ill Americans a seat at this historic event. Against this backdrop, the market’s sign already looks as dated and offensive as a “No Coloreds” sign on a 1960s Alabama water fountain.

Of course, some will argue that donating to a charitable organization is a “better” use of funds than a handout. In fact, one does not preclude the other. Give generously to charities. But also give to those who ask as you walk past. The gift of course is as much to oneself as to the recipient. As the saying goes, be not unkind to strangers, lest they be angels in disguise. 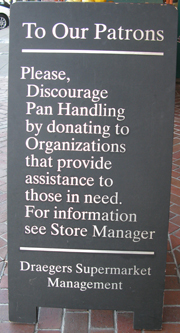