The single most arresting image from last week’s Mumbai terror siege is the picture of a lone terrorist walking through Mumbai’s Chhatrapathi Sivaji Terminus. Clad in cargo pants and a t-shirt and carrying a pack, he looks like a college student or a tourist. The expression on his face is not the grim determination of a Mohamed Atta, or the crazed anger of a mujahadeen; but for the AK-47, the shooter looks like he is about to greet a friend or ask a helpful clerk for directions.

As it happens, he is Mohammad Ajmal Amir Iman (or some variant thereof), the only terrorist to survive the Mumbai attacks. He is 21 years old, speaks fluent English, and having decided that he wants to live, is reported to be fully cooperating with the Indian authorities. He already has his own wikipedia entry, and he is about to become very, very famous.

In the next few weeks, as the press seeks a new angle to it’s nonstop coverage of the tragedy, Ajmal will emerge as an exotic new species of complex, twisted, tragic anti-hero. The media will demand that India make him available for interviews. He will become an object of loathing and frenzied celebrity worship. Survivors and victim’s families will revile him. Young men will rush to buy khaki cargo pants and navy t-shirts in order to ape his style. Fundamentalist clerics will issue a fatwah against Azam for betraying their cause by not martyring himself. Mothers will want to adopt him. Women will send him offers of marriage, and Bollywood stars will compete to play his character in the many films to come about the Mumbai crisis. Books will be written about him.

Ajmal reportedly killed Mumbai’s three police heroes, Hemant Karkare, Vijay Salaskar and Ashok Kamte. Ajmal will of course be tried and convicted, but I doubt he will be executed as he is vastly more valuable alive than dead. If the Indian government is smart, they will turn him into an anti-terrorism poster child. Ajmal will record public service messages renouncing his murderous ways and dissuading youth from turning to terror. And if he isn’t muzzled and locked up in a prison forever, he will become an anti-terrorism advisor to governments around the world. Dan Rather will come out of retirement to interview him. He will appear on Oprah. Creative Artists Agency will attempt to sign him on as a client. Business schools will study the attack as a model of organization. He will have his own website, and he will write a global best-seller.

Of all the names we have heard in the last 60 hours, be they villain, victim, or hero, Ajmal’s will become far and away the best known. As global media begins to spin its gossamer web, Ajmal will come to embody a bit of all three qualities: a murderous but repentant villain, a young, brainwashed victim, and a self-redeemed hero dedicated to a lifetime of atonement for his actions. The picture of him in Mumbai’s CST will become the iconic image for a new chapter in terrorism history, a chapter vastly more nuanced than that which opened on 9/11.

And hiding in a dank cave somewhere in the tribal regions, a bitter Saudi gentleman, old before his time and in bad health, will notice and be very, very jealous. 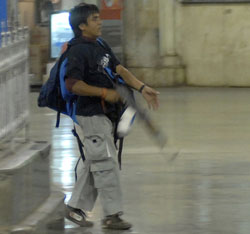