When Bush signed the Emergency Economic Stabilization Act on October 3rd, I couldn’t help but imagine an ink-stained Secretary Paulson in the basement of the Fed warming up the presses, getting ready to print $700 Billion in bills to be trucked in a vast fleet of armored trucks to the recipient banks under the Fed’s Troubled Asset Relief Program.

Of course the Fed isn’t actually printing money — the $700 Billion is a cloud of electrons created out of thin air with a few keyboard clicks in a breathtaking act of spreadsheet legerdemain. And so far at least, the banks are showing no inclination to actually lend it out to anyone, preferring to use the cash for mergers and acquisitions.

Or maybe not. Shortly after my bank received their $20+ billion TARP payment, a funny think happened. For the first time in many years, I noticed that the Twenties coming out of the ATM machine were all crisp and new — so new that the ink was barely dry. I can’t recall the last time I noticed crisp new bills coming out of an ATM, and it has happened not just once, but every single time I’ve been to the ATM in the last 10 days.

Coincidence? Of course — all my crisp new bills bear the signature of John Snow, Paulson’s predecessor. But if those crisp Twenties keep coming, this time with Hank’s John Hancock on them, I might just start to wonder if it isn’t a case of a new kind of trickle-down economics… 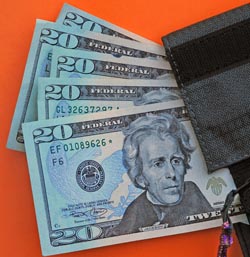