The Large Hadron Collider switches on in less than 36 hours, and at least one scientist, Tübingen Chemistry Professor Otto Rössler thinks it is very bad news. He believes that it is “quite possible” the LHC will unleash “mBHs” –mini-Black Holes– that will grow exponentially and gobble up Earth.

Whatever the merits of his claim, he is not the first to fear a science innovation would obliterate the planet. During the Manhattan Project some scientists warned that the first A-bomb would ignite the atmosphere. The possibility eventually was dismissed, but while waiting on Campana Hill to witness the first atomic test, the morbidly droll Enrico Fermi offered to take bets on whether the atmosphere would burn up. Jokster Fermi had no takers, and a good thing, as it didn’t.

Then in 2000, there was another kerfuffle around the possibility  that the then-new Brookhaven Heavy Ion Collider might create planet-eating mBHs, or worse, a “strangelet” a theoretically-speculated  particle that opponents feared would instantly turn the planet into a  charcoal briquette. Last time we checked, the planet was still here.

But this is one moment when we can be grateful for the US slide in science, for it means that the locus of the controversy this time is in Europe and not Texas. Imagine for a moment if the SCSC — the SuperConducting Super Collider— had actually been  built in Waxhachie Texas. It would not only have dwarfed the LHC, it would been right in the heart of the American Bible  Belt, surrounded by God-fearing, Apocalypse-minded Left Behind reading fundamentalist Christians primed to see the number of the Beast in its 54 mile long 30TeV beam. The mind boggles at the stir it would have caused, a vast wacko magnet inspiring the ignorant and superstitious across America to march on the site with crosses and flaming torches.

But mercifully, the LHC is thousands of miles away in a place (France and Switzerland) the fundamentalists belittle or ignore and a science-averse American media refuses to cover. Other than an alarmed Rössler, a sophisticated and bemused European public is merely curious to see what the LHC will discover.

The LHC is no more likely to create planet-eating mBHs than the first atomic bomb was likely to consume Earth’s atmosphere. But it really could be the end of something — and the beginning of something else. When the LHC eventually reaches full operation a few months from now, it will mimic the conditions occurring one trillionth of a second after the Big Bang. It may reveal the Higgs boson, overturn the Standard Model or reveal some vast surprise beyond the weirdness that is the norm in physics today. And who knows, perhaps somewhere in the particle stream, humanity might glimpse the fleeting shadow of Einstein’s “Old One.” Now what would the Bible Belt think of that! 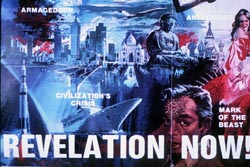