Novelist William Gibson once observed that “the future’s already arrived; it’s just not evenly distributed yet.” Well, the future of post $100/bbl oil has arrived early in the incarnation of $4.56/gallon gasoline at a Shell Station on El Camino Real here on the San Francisco peninsula. Now, given that the price is nearly a dollar more than any of the surrounding gas stations, it was hardly a surprise that the station was devoid of customers (and that is clearly the owner’s intention), but given the evident illogic of current prices could the prices at this maverick station eventually become the unremarkable norm? 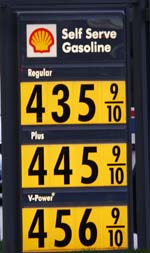