Technology does not always advance. And the best technology often does not win, particularly when it comes to interfaces. Famous examples abound, from QWERTY winning out over the Dvorak keyboard, to that of the Macintosh and Windows interfaces, with the latter having a vastly larger installed base despite being a flawed and inferior knockoff of Apple’s elegant innovation.

But Hewlett Packard’s announcement last month of a “Retro” edition of its HP35S calculator highlights another interface that is an even greater lost opportunity — Reverse Polish Notation. Invented in the 1950s by Australian computer Scientist Charles Hamblin, RPN was adopted by HP as the interface for all of its calculators back when calculators began appearing in the early 1970s. RPN is a vastly more efficient way to enter problems on a calculator than the standard infix method used on virtually every calculator sold then — and today. For example, if one wished to add 5 to 7, with infix on a conventional calculator, the keystroke sequence is [5], [+], [7], [=], while with RPN on the HP35S, one enters [5], [ENTER], [7], [+]. Now this example doesn’t do RPN justice, but if one is doing a long equation, RPN is not only more efficient in terms of keystrokes; it also dramatically reduces the ambiguity of expressions (think lots of parentheses one must keep track of with infix).

But RPN had one problem — it is not intuitive for people used to calculating with pencil and paper. Infix caught on because it mimics the old way of pencil-pushers, but of course it is as crazy to use infix as it would be to require people to write with a quill pen instead of a keyboard. RPN requires only a modest learning curve, but even a modest curve was too much to overcome. Borrowing an analogy told to me by Doug Engelbart, RPN is to infix as a 2-wheeler bike is to a tricycle: The tricycle has no learning curve, but it will never go fast. In contrast, the two-wheeler takes some practice, but once one learns, the bike is a high-performance tool.

Unfortunately, RPN never caught on widely and even HP lost its nerve and abandoned RPN for most of its calculators. As a consequence calculator users today have no choice but to purchase computational tricycles. But try RPN and you will never go back. I learned RPN after getting my first HP in college and I keep a 20+ year-old HP41 (HP’s legendary high-water mark in calculators and the calculator equivalent of a triathlete bike) on my desk and use it every day. Financial types have it easier, as HP has kept it’s classic HP-12C calculator in production for decades (there is also an anniversary edition of the HP-12c), but until now, scientific users were stuck haunting eBay for old HP-41s or buying newer HP calculators with compromised semi-RPN options.

Now the new (old?) HP35s changes all that. One can have the latest in technology and the best in interface for under $60. Perhaps a bit of nostalgia might cause RPN to finally catch on beyond a too-small band of believers and traditional calculators will end up on the recycling heap where they belong. In the meantime, buy your RPN calculators while you can… 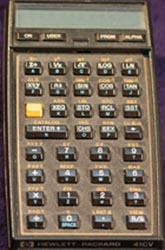