Quick, name the button on the lower right-hand corner of the touch-tone pad of your phone. “Pound sign?”, “Hash Key?” “Number sign?”, “tic-tac-toe button?” — there seem to be an endless number of candidate terms and very little agreement on which to use. It is a key with an identity crisis.

I think it is about time to converge on a single term and I have a favorite candidate — “octothorpe.” I was reminded of this admittedly obscure label back in April 1997 during a visit with Sheldon Hochheiser, then the Corporate Historian in charge of the AT&T Archives. He was taking me on a mini-tour through his treasures — I got to look at Watson’s notebook with his March 10, 1896 entry describing his first phone conversation, and also read Brittain’s notebook writing up the late 1947 discovery of the transistor — when the subject of the troublesome key came up, “Oh, around here, we call it an octothorpe, but the term has never caught on.”

According to Hochheiser, the term was coined at Bell Labs, but was opposed by Western Electric, the division of AT&T that of course was making the actual phones. That was enough to keep octothorpe from passing into everyday conversation, and the resulting stalemate meant that the key had no name at all.

Now admittedly, the etymology of octothorpe is unclear, because no one can say for sure who coined it. A quick web search turns up a host of explanations for its invention, ranging from the whimsical (it was an inside joke) to the serious (it was inspired by a Norse term for village), but all the explanations agree that the term came out of Bell Labs. But of course what matters most is that the term is utterly unambiguous — once one learns the word, there is no doubt what it refers to. For all these reasons (and the fact that octothorpe is fun to say), I think it is high time we adopt octothorpe for everyday conversational speech and finally give the nameless key an identity that everyone can remember. 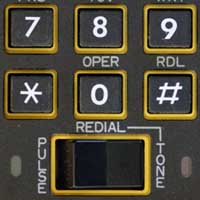