Myun Sin Dang Brush shop (lit, “Bright House Brush Shop”) is a boot gul see (calligraphy) shop as spectacular as it is unpretentious. Located in Seoul’s Insadong district, it has been in business for over 30 years, it’s owner selling calligraphy supplies on the first floor and offering calligraphy classes on the second.

Myun Sin Dang offers a wonderful selection of brushes, ink and ink stones, but it is particularly well-known for it’s do-jang (stone seal) engraving. Two carving workbenches occupy a place of honor in the front of the shop, and depending on how busy they are, one can have a seal cut on the spot.

Myun Sin Dang is one of a handful of extraordinary calligraphy shops on the planet. In fact, it is even something of a celebrity mecca: on its wall hang pictures of Pope Benedict XVI and Queen Elizabeth II, just two of many famous visitors who have stopped in the shop over the years. If one is in Seoul with an hour or two to spare, I can’t think of a nicer errand than to stop in Myun Sin Dang to buy an ink stick or a brush or two, and watch the carvers work their magic. 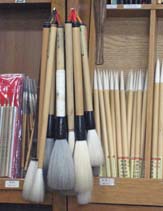