As a forecaster, I rely on method and data to do my work. I don’t use a crystal ball, consult oracles or peer at tea leaves. But I also depend on intuition. Informed intuition backed by evidence and tied to facts, but intuition nonetheless. Data and method are essential, but not sufficient. And then there are moments when the whispers of intuition can skate awfully close to the world of oracles and portent. Like a few evenings ago, when a Western Screech Owl (Megascops kennicottii) flew into my house and perched on my desk.

Now we have our share of wildlife on our ridge: brush bunnies and wood rats to coyotes, bobcat, and even the occasional rattlesnake in the garage. But an owl on my desk? The Greeks considered owls to be messengers, avatars of Athena, and symbols of wisdom, The Maya feared owls portents of disaster. In the American Southwest, owls were sorcerer’s familiars while Japanese mythology is ambiguous, with some owls being demons and others messengers from the Kami.

The gentle little guy staring up at me hardly seemed the agent of omen. Perhaps he flew in to peruse my library? I was tempted to enquire, but also eager to return him to the night, so after leaving him in a darkened room for his night vision to return, I carried him to the window. He gave me one last look with those big eyes, spread his wings and flew silently out into the night. 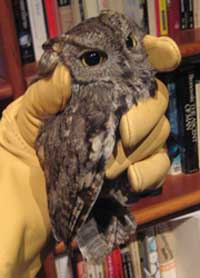