Second Life is a marvelously innovative and original multi-participant world that is growing like crazy — it just crossed a million registrations and will likely pass two million registrations by Thanksgiving.  All the signs indicate that Second Life is thus at the inflection point of the virtual worlds adoption curve. Second Life is taking off primarily because of the creativity of the folks at Linden Lab, who figured out crucial details like property ownership, not to mention creating great world-building tools (their client is adequate, but has room for improvement).

But timing also works in Linden’s favor — they had the right ideas and right system at a moment when we finally had sufficient bandwidth and computer performance, not to mention a population of users already online and ready to take the leap into virtual worlds. Not surprisingly, the road to this moment is littered with the corpses of glorious (and some not so glorious) virtual world failures. Second Life could itself stall out, but rich virtual worlds — especially gaming worlds– seem here to stay.

It turns out that like most new ideas in Silicon Valley, the virtual worlds idea has taken 20 years to become an overnight success. The original ur-world was LambdaMOO , a pioneering MUD (Multiple User Dimension) created by Pavel Curtis, itself a novel spin on earlier text-based Multiple User Dungeon and Dragon environments. In short order, the first graphical MUD, Habitat from Lucas Software appeared in the mid-1980s. Like Second Life, one navigated through the agency of a personal avatar, and one could buy and sell stuff, socialize, and otherwise do many things available in Second Life. But Habitat was ahead of its time — computer graphics back then could barely support the cartoon interface, and of course the meager bandwidth of the time was a disaster.Here is a shot of Habitat: 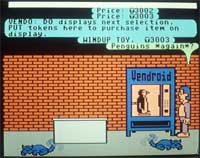