The Segway is perhaps the most astoundingly original invention I have encountered in over two decades of watching the unfolding computer revolution. And certainly the most fun to ride! My initial reaction to the recent recall was thus one of dismay. But as the details came out and I had time to reflect, I realized that, if anything, the silver lining in this particular crisis is vastly larger than the underlying cloud. This recall is very good news for Segway’s future.

First of all, this recall is tiny, a measly 23,000 scooters, quite unlike calling back hundreds of thousands of cars. And the problem is quickly fixed with a software download at a Segway distributor — hardly the stuff of flaming batteries or exploding gastanks. Thus, the recall will be completely behind the company in no time and other than the 6 reported injuries, no one will be hurt.

I’ll bet Segways owners not only aren’t mad; this will make them love their scooters even more. Because of course the Segway really isn’t a scooter. Rather, it is a computer with wheels, and everyone knows that with the privilege of being an early adopter comes some risk of crashes. Early Adopters wear this risk like a badge — it is part of the coolness of being first. I’ll bet Segway owners are already boring their friends with tales of close calls rescued only by their superb conditioning and lightning reflexes.

Which brings up the real problem with the Segway. It isn’t speed (fixable by overriding the governor) or lack of battery life (give Segway time) that have held back sales, but rather the fact that one looks like a silly dork when riding a Segway. The problem is posture — communicating with the Segway’s sensors forces Segway riders to stand as erect as Cub Scouts reciting the Scout Oath. Rebels don’t salute, they slouch like James Dean in his Porsche 555 Spyder or sprawl like a biker on a Harley. But slouch on a Segway and you may end up eating asphalt. As rebels go, Segway riders might as well have a kerchief around their neck and a Tootsie Pop in their mouth.

But the software bug changes all this in an instant. Segway riders no longer look silly when everyone realizes they flirt with danger everytime they unplug and roll off. Their spines may be straight but they are as cool as Hells Angels! Pretty soon, we’ll see packs of Segway riders with Marlboros dangling from their lips and a lighters tucked into their Brando muscle shirts, racing down the streets with a look of reckless menace worthy of the Wild Bunch.

Of course given how few Segway owners there are, the impact of the recall on non-owners is what matters most. And here too, the bad news is great news. Everyone is hearing about the Segway this week, and all the news is stirring up would-be buyers all over again. Add in the whiff of danger that comes with being an early adopter and I’ll bet that Segway sees a spike in their sales. But Dean, I have a big favor to ask: Can I have mine with a leather biker jacket? And please embroider the back “Maxwell’s Demons.” 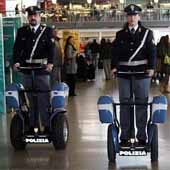