Yesterday’s fifth anniversary of the 9/11 attacks was striking for one reason above all others; despite the grief of the survivors, and the calls to “never forget,” this anniversary will be remembered as the moment when custody of 9/11 passed from the swirl of current events and into the hands of history. The spontaneous emotions of five years ago have been replaced by somber, rehearsed pagentry: a formal wreathlaying at Ground Zero and the folding chairs set up once again in a Pennsylvania field that will become a granite-clad memorial. Congress’ spontaneous and perfectly bipartisan 2001 chorous of “God Bless America” was reenacted this year by a minority rump of representatives and accompanied by a Marine Band. After the too-brief mandatory show of solidarity, our elected officials promptly fell back to the usual partisan carping and politiking.

9/11 will continue to tug at our memory and sorrow, but we live in a 9/12 world. It is a world shaped not by the original attack, but by our reaction, and the vast Brownian Motion of unintended consequences. The momentary clarity of towers collapsing in the late summer’s light is replaced by a vague and haunted fog in which cause and effect are all but indistinguishable.

This 9/12 world has leached all conviction from once-certain American patriots, evidenced in the anemic viewer numbers for yesterday’s many 9/11 retrospectives. Our fellow citizens are thoroughly disengaged and able to muster at best only a vague shuddering nostalgia for the events that once so held their attention. Catching a snatch of a 9/11 retrospective, many people paused momentarily in their daily round, and then turned back to looking for a Starbucks, grabbing a BigMac, or picking up their kids at soccer practice. And to the extent that anyone dwelled on the big issues at all, 9/11 was overshadowed by everything from the Iraq War to illegal immigration and the uncertain economy. All this was evident in a recent Washington Post/ABC News poll in which more people blamed 9/11 on post-9/11 President Bush than the pre-9/11 President Clinton.

Try as many might to keep 9/11 alive in the public mind, the tragedy of five years ago already has begun to take its place alongside events like Pearl Harbor, and the evacuation of Saigon. Before we realize it, aging firefighters will be showing up at future anniversaries, shuffling onto the stage like World War II veterans marching with their canes in Memorial Day parades. The good news however is that the die is not cast; the outcome is not yet determined in this new 9/12 world. Actions today still have the power to shape the distant future. Whatever our mistakes may have been in the last five years, whatever lost opportunities may lie in the disappearing wreckage of the World Trade Center, we can take comfort that wise action now may just save us from otherwise inevitable catastrophes in the years to come. 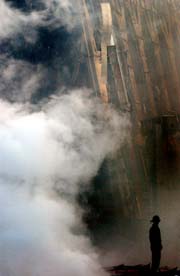