“The fox has many tricks; the hedgehog only one great trick.” This proverb credited to the 7th century B.C.E soldier-poet, Archilochus was immortalized by Dutch Humanist Desiderius Erasmus in the publication of his Adagia in Paris in 1500, and it has been invoked anew by every generation since. Fifty years ago, historian Isaiah Berlin borrowed Archilochus’s parable as the title of his gem of an essay, “The Hedgehog and the Fox.” Berlin’s nominal topic was Tolstoy’s view of history, but the essay speaks eloquently about two very different worldviews. As Berlin observed, hedgehogs believe in one thing, one truth, to the exclusion of all else. Foxes are the opposite, comfortable juggling many competing and contradictory truths. Hedgehogs are monists; foxes are pluralists. The fox is agile; the hedgehog doughty and immovable.

And which is the better strategist? Well, when hedgehogs are right, they can be spectacularly right, but when they are wrong, they are usually spectacularly wrong. Foxes rarely enjoy the hedgehog’s peaks, but they also never experience the hedgehog’s disastrous valleys, for foxes are constantly adjusting their foxy strategy as they learn new information. Hedgehogs are belief-driven; foxes are discovery-driven. Berlin’s list of hedgehogs includes Plato, Dante, Hegel Dostoevsky and Nietzsche; in the pluralist fox column he places Aristotle, Shakespeare, Joyce, Picasso — and wily Erasmus who skillfully threaded his way through the tumult of the early Reformation.

Erasmus’s translation of Archilochus (Multa novit vulpes, verum echinus unum magnum) suggests that the old soldier-poet thought the hedgehog wiser than the fox, but Berlin was the quintessential pluralist, and believed that monism is the most destructive of all human inclinations. With memories of two hedgehog-caused World Wars, it is little surprise that Berlin passionately opposed both Fascism and Communism, and if he were still alive today (he passed away in 1997), I suspect that he would view the rise of today’s myriad fundamentalisms with equal alarm. It seems we live in a moment suffering from an overabundance of quarrelling hedgehogs, and a shortage of foxes. 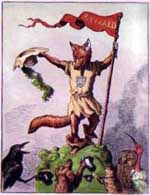