While at Strong Angel a week ago, I ran across the Gatr deployable satellite antenna, easily the cleverest deployable satellite antenna I have ever seen. Instead of a traditional hard dish, the parabolic antenna is a flexible membrane sewn into a large (either 1.8 meter or 2.4 meter) sphere made of the same high-tech material used for racing sails. The result is a sturdy, full-sized but lightweight (70 lbs for the 1.8 meter version) satellite antenna that when inflated by a tiny motor, resembles an oversized beachball. Performance however, is anything but lightweight as the antenna offers full performance indistinguishable from traditional hard dishes. Unlike hard dishes which take trucks to move, the inflatable Gatr dish stuffs into a large duffel and can be backpacked in by one person. Until now, the only portable option were small flat antennas which carry a heavy performance penalty compared to full-sized dishes, particularly in marginal areas. The Gatr is actually easier to carry than these flat antennas, without any performance hit. Gatr thus is the perfect solution to providing broadband communications in remote locations and during large-scale disasters.

The Gatr antenna is the brainchild of former NASA engineer and Gatr co-founder, Paul Gierow. Gatr Technologies (www.gatr.com) is still an early-stage start-up and there are only a few of their antennas in existence, but the prototypes are so immensely and self-evidently practical and high performance that I would not be surprised to see Gatr’s antennas popping up at everything from emergency sites to the next Michael Jackson trial. 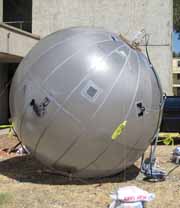 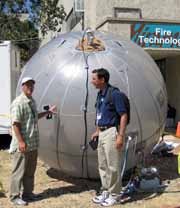