Fifty years ago this month, the world lost one of the most extraordinary biological discoveries of the 20th century, an island biogeography in the South Pacific inhabited by the Order Rhinograde. The Rhinograde (commonly called “Snouters”) were a diverse mammalian order defined by the shared trait of highly evolved snouts. Like Darwin’s finches, the snouters evolved to fill a myriad of specialized niches, using their snouts for an astounding array of functions. For example, Archirrhinos haeckelii (Haeckel’s Primitive Snouter — see figure below) was a mouse-sized mammal that sniffed out prey like a truffle pig and then cleverly used their probosci to stun and consume their meal.

The Snouters were discovered on an island in a remote southern ocean archipelago by Einar Pettersson-Skämtkvist, a Swedish prisoner of war who happened upon the Snouters while escaping the Japanese. His report was dismissed by the Stockholm scientific community as a mere sea tale until Dr. Harald Stümpke undertook an expedition and rediscovered the lost paradise, devoting several years of his career to studying this astounding mammalian community.

Then, just as Stümpke’s magnum opus was being readied for print, the snouter’s island was destroyed in a carelessly executed nuclear test. We will never see see a Snouter in the flesh again, but fortunately, we have Stümpke’s notes. And though his book (The Snouters: Form and Life of the Rhinogrades, American Museum of Natural History 1967) is long out of print, one can still occasionally find it in book stores and online at sites like ABE Books. It is a must read for anyone interested in the evolution of evolutionary theory, and a sobering tale for anyone concerned about the loss of planetary biodiversity. 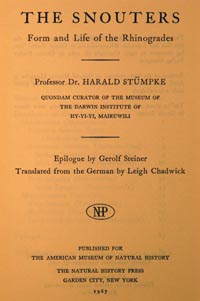 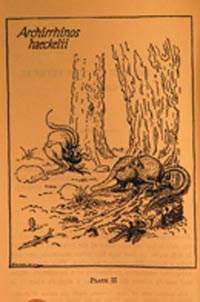