The Road from Trinity: Reflections on the Atom Bomb

Los Alamos. The place takes its name from the cottonwoods that fill the deep arroyos cutting into the high mesa on which the weaponeer’s labs squat. Oppenheimer selected this place for its wild remoteness, and even though the quonset huts and wooden barracks of World War II disappeared long ago, flattened to make way for a Cold War sprawl of offices, tract homes, and mini-malls, the sense of isolation remains. At night from Santa Fe, one can see the lights of Los Alamos glittering high and alone in the far mountains, a nuclear Potala inhabited by shadowy atomic monks.

The approach to Los Alamos is up a narrow cliff-hugging highway that ribbons westward across the fields and pueblos that dot the Rio Grande river valley. At the lip of the mesa, the road passes an empty guardhouse. A handful of wives and workers gathered near this spot just before dawn on a July morning fifty years ago. Watching toward Trinity, 100 miles to the south, at 5:30 a.m., they witnessed an enormous flash on the horizon, the world’s first nuclear explosion. The flash was so great that some feared the entire crew at Trinity must have been wiped out. At Trinity, optimists hoped that the new bomb would end the war with Japan. Idealists prayed that the very existence of the bomb would make itself obsolete by ushering in a world where the consequences of war would be too great for war ever to start again. Realists knew better.

In fact, Fat Man and Little Boy quickly passed into obsolescence, but not because they were too terrible. Rather, they were not terrible enough. The wizards of Los Alamos quickly built new devices that made the bombs of Hiroshima and Nagasaki seem puny by comparison. And in a few short years, the A-bomb’s terror was superseded by the greater horror of the H-bomb. Trinity’s eighteen kilotons lit the sky and glazed the desert. “Mike,” the first thermonuclear bomb, vaporized an island in a ten-megaton blast, five-hundred times the power of Trinity.

The bombs that once terrified us are now quaint antiques, their defanged casings on view in museums from Los Alamos to Nagasaki. A megaton’s worth of suffering can now be packed into a package smaller than that which delivered Little Boy, and compared to the sinister sleekness of today’s weapons, the antenna-festooned Fatman seems as archaic as a suit of medieval armor.

Oppenheimer and the other atomic pioneers quickly followed their bombs into obsolescence. Little trace is left of their presence at Los Alamos beyond dusty exhibits in the city’s museum, the odd street sign, and a handful of bronze plaques. The small teams of pioneering scientists have been replaced by a vast and anonymous nuclear bureaucracy. As large as Los Alamos has grown, it is now merely one of many cogs in a self-perpetuating thermonuclear megamachine, methodically devising steadily more subtle forms of nuclear cruelty. Nearly a decade after the fall of the Soviet Union, the U.S. military establishment is spending record amounts of dollars to preserve and refine its over-large nuclear arsenal, even as the weapons stocks of its former enemy continue to deteriorate and dwindle in number. Meanwhile, others yet struggle to join the nuclear club, at terrible cost and for no imaginable practical purpose.

Once Alfred Nobel thought that the terrible power of dynamite would shock the world into peace. Two wars later, the wizards of Los Alamos hoped that they would succeed where Nobel had failed. But like Nobel, they overlooked mankind’s capacity to accommodate itself to yet newer horrors. Each successive wave of tragedy and suffering merely numbs our collective moral conscience. The strategic bombing of Europe and the firebombing of Tokyo made once-unthinkable mass slaughter of civilians an unremarkable fact of war. By the time Truman and his planners were presented with the option of the A-bomb, its use seemed inevitable. In fact, after the vast sums spent building on the bomb, Truman would most probably have been impeached had he not ordered its use.

But there is a hint of a silver lining in the nuclear cloud. Perhaps Oppenheimer’s idealistic wish did come to pass, for while the threat of nuclear retaliation has been a cornerstone of statecraft over the last forty years, the actual use of nuclear weapons has not. The last few decades have been punctuated by one nasty little war after another, and no shortage of cruelty. But no bomb has been exploded in anger since Nagasaki. The arms race was ruinous to economies and an environmental nightmare, but at least its bombs never found their way to unsuspecting populations. Nukes still serve as potent totems for insecure heads of state, but so far at least, no one seems eager to push the button in anger. Is it possible that humanity has finally found the beginnings of a collective restraint? Five decades of nuclear quiet are grounds for hope, but it is probably too soon to tell.

The struggle to keep the nuclear genie bottled continues unabated; all the while, mankind seems bent upon devising far subtler horrors. Who needs world-wrecking super-bombs when ever-smaller groups of unhappy individuals can threaten with nerve gas, biological toxins, and genetically engineered viruses? Against this backdrop, even the H-bomb seems as quaint and awkward as a catapult. Horrors that once required years of work by entire armies can now be summoned by solitary individuals.

Even if atomic energy is never again unleashed in anger, its legacy will haunt us far into the future. Without the bomb, World War II would quickly recede into history as but the latest in a long line of cruel and murderous conflicts. But this war will stand out, for its cruelty inspired a technology that sawed through the anchor chains of reality. We now know that the comforting solidity of our world is but an illusion. Nudge a few neutrons and matter will evaporate like a soap bubble, transmuted into energy. Nudge the right neutrons and our world would utterly disappear.

Below the mesa’s edge, just beyond the last workshop, the cottonwoods still grow as they have for thousands of years. Oppenheimer knew of this place from boyhood summers spent in these mountains. In rare breaks from the race to build the bomb, he rode his horse through the forests around Los Alamos. Walking these canyons, one can almost hear the crunch of hooves on river gravel in the wind-whisper of these trees. If one listens very carefully, one can also hear the ghosts of Trinity in this haunted wood. “Oppenheimer and the wizards of Los Alamos thrust mankind into a new frontier,” they tell us, “a frontier of terrible freedom. An infinity of paths lead away from Trinity, some to unimaginable hells, and others to new heavens on earth. Trinity’s dark gift is a gift of choice in a world made utterly mutable by the nuclear alchemists. They have passed into our world now, but the gift remains. It is up to you to choose wisely and well.” 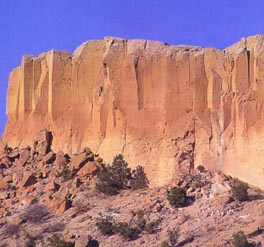 Download: The Road from Trinity: Reflections on the Atom Bomb (PDF)